Attached are a few pictures of the Miser engine I built. Although I am a little inexperienced at machining, like any good hobbyist I made some changes to make it more difficult to build!
It is the first engine I have made and I am very pleased with the results. The plans were great, as was the service. 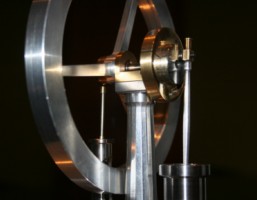 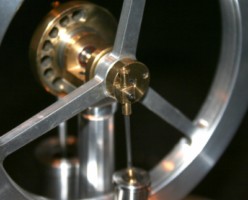 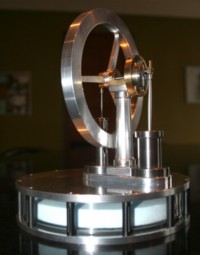 Allen
Posted by Allen at 6:13 AM No comments:

Email ThisBlogThis!Share to TwitterShare to FacebookShare to Pinterest
Labels: MISER

From the Craftsmanship Museum: First Pop of our Howell V4 engine

March 16th was a big day in the Joe Martin Foundation machine shop. After starting the build in September, 2007, Tom Boyer finished the Howell V4 engine and made the first attempt at starting it. With Joe Martin, Pam Weiss, Tom, Craig and our realtor Justin present, we held our breath while Tom switched on the ignition and turned the engine over with an electric drill for a starter. Within a few tries the engine sprang to life briefly, running for a little over one second and then stopping several times. While technically a "run," it was late in the day and Tom wanted to think about it overnight before going further, hoping he had not forgotten something important.

The next morning, March 17th we tried again. The engine gave a few brief bursts as it had the day before, and then after one final adjustment of the fuel tank needle valve it suddenly sprang to life and kept running. After a minute and a half or so of running Tom closed the needle valve a little further and it stopped, but it was now just a matter of fine tuning to get more run time out of it. Today Tom changed the crankcase oil and tried again, and after advancing the timing a few degrees it fired up again and is running even better now. It still needs a throttle lever and an advance lever plus a finished wood display base, but to the relief of all it now runs and has already been demonstrated for a few visitors to the museum.

A video of the "first pop" and the first significant run can be seen on YouTube at http://www.youtube.com/watch?v=hWPrXAgoezA. The video is about 4-1/2 minutes long. Today I also filmed a short 30-second version of it running, and links to that can be found on the Howell V4 page in two file formats—WMV (large and small screen) and MPEG1. While you can click on the link and play it directly over the Internet, we suggest you right click on a link and select "Save Target As" in the pop-up window. Save the video to your desktop or "My Videos" folder, then play it with your favorite media player. This will eliminate any problems with pauses during the replay.

Our congratulations to Tom Boyer for an excellent job on overall construction and assembly of the engine. It is certainly a job worthy of display in the Craftsmanship Museum. Thank you also to the others who helped make parts for the engine, including Joe Martin (camshafts), Pam Weiss (fan blades), Larry Simon (tools, fixtures), Adam Kritchbaum (skid support rails), Dave Eggert (air cleaner) and Bob Seigelkoff (pistons). We only wish the late Jerry Howell were still alive to be able to see the engine he designed come to life. The excellent plans for this engine are still available from his family at http://www.model-engine-plans.com/.

Sincerely Yours,
Craig Libuse
Director
Posted by Allen at 8:47 AM No comments:

Email ThisBlogThis!Share to TwitterShare to FacebookShare to Pinterest
Labels: V4

Only deviation I made from your father's plans was the flywheel...
I borrowed the idea for this flywheel from Joe Kalke... He used this
flywheel design when he made his "4 in1" engine... Hope he doesn't mind... 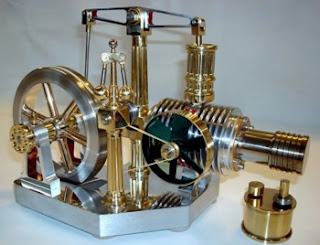 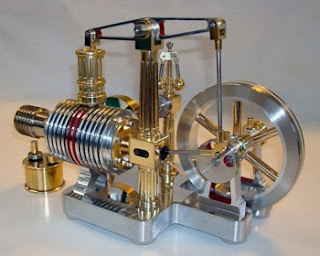