I just finished building the TIM-6. It is now a TIM-3.6. If anybody asks, tell them to leave out the diode and put a wire jumper where it goes. This diode is a safety so you can’t hook up the batteries backwards but also limits the voltage to the coil.

Bill Mitch
Posted by Allen at 6:02 PM No comments:

Email ThisBlogThis!Share to TwitterShare to FacebookShare to Pinterest
Labels: TIM6

I just finished  machining an intake manifold from scratch. I modeled the block and heads in SolidWorks and was able to use the assembly feature of SolidWorks to design a two-piece intake manifold that looks identical to the original cast version. It uses six dowell pins and Loctite high temp bearing retainer to hold the two sides together. I cnc'd the two halves on a Tormach mill (about three hours machining time). I still need to do the secondary machining, i.e. bring the arms to final length (I left them .020" long just in case my model in progress wasn't exactly the same as the prints) and to machine the water cavity and o-ring. I'll post some photos in the next few weeks on the Tormach website and post the URL here since I don't think I have enough space to post the photos here.
My original plan for the exhaust manifolds was to just fab some stainless tubular headers like I did for the V-twin but I think I'm going to try to design a pair of them in the same way I did the intake manifold. I think like the looks of them in the photo of the model built by the Craftsmanship museum better than the headers I had in mind. - terry

Here are some pictures of the intake manifold that I designed from scratch for the Howell V4. I made it in two halves and then joined them with 8 dowell pins and high temp Loctite bearing retainer. The seam is invisible in the final finished part. I still have the water cavity and its o-ring groove to mill, but the manifold fits the three head/block surfaces perfectly with no daylight between them even without the required o-rings. I made two sets of halves but only finished one out since I haven't yet (at least) screwed the first one up. I was planning to produce and offer the halves for sale, but each set required three hours of machining time on my Tormach running even with the high speed spindle; and I just don't want to get into any kind of production with that type of efficiency. It is now very clear to me why Jerry decided to cast these parts.
After I receive my .046" endmill to machine the bottom o-ring groove I plan to start on a set of exhaust manifolds. I have a reasonable preliminary model so far with these parts as single pieces as I am concerned about the possibility of exhaust heat causing a pair of halves to separate. It will require a precision bored and plugged workpiece though from which the parts will be milled from two sides in order to keep the exhaust runners similar to the original castings. - Terry 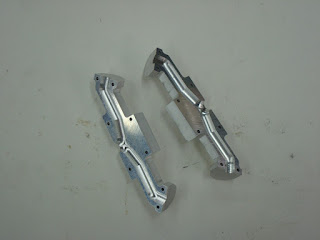 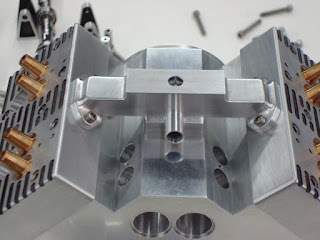