I made this back in 2002 from a set of Jerry's drawings. I modded the cascabel and button slightly to a more British pattern - though 1779 was hardly enough time for the designs to have diverged much. Mine is in blacked steel and oak.

24 pounder was originally a Dutch calibre, copied by the English after the Dutch Wars of the 1690s as being ideal for the middle gundecks of a 3-decker, or the lower on a 2-decker.

I was very sorry to read of Jerry's demise - I didn't know him, but think very well of his work. So far as I know, nobody else has marketed such an accessible, properly annotated and reasonably priced set of artillery drawings. 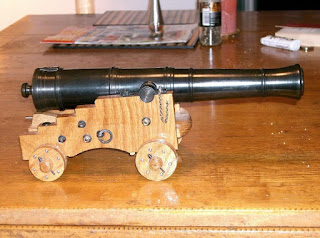 Email ThisBlogThis!Share to TwitterShare to FacebookShare to Pinterest
Labels: CANNON