This is Adam Krichbaum,  I purchased the Galloway kit from you, that your dad had in his collection when I was at the NAMES show a few years ago.  I thought you might like to see some pictures of the engine.  I finished it last summer and although I did not paint it red I think it came out pretty well. Thanks for the opportunity to own this model.  It means a lot to me since Jerry owned it.  I met him a few times and talked to him on the phone a few times as well.  I have multiple ignition systems from him and I made the frame rails for the V4 engine that is on display at the Internet craftsmanship museum as well.  I also built the power house engine from his plans.  That was the first IC engine I ever built. 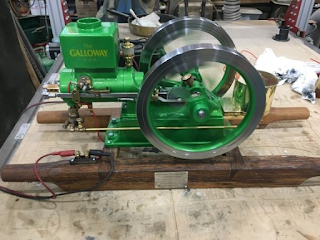